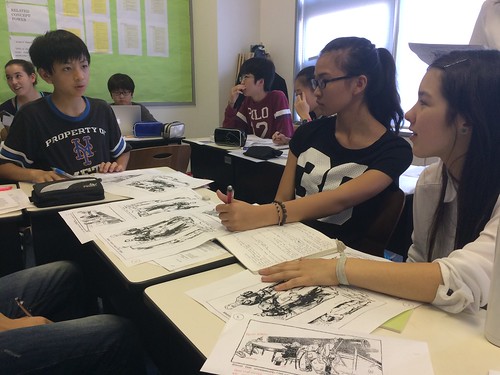 I spent some time in classes this week and wanted to share some of my observations. In the photo above, the grade 9 humanities class is discussing political cartoons from the time of the end of World War I. The students are learning about the Treaty of Versailles and instead of just memorizing dates, names, places, etc., they are applying their knowledge and thinking critically about the issues. Their major assignment for the unit will be to write a letter to the League of Nations, the precursor to the United Nations, taking the perspective of the defeated Germans, protesting the conditions in the agreement. This is very “IB” to have students put themselves in other’s position. I got the opportunity to help the group above, analyze the political cartoons. Our cartoon showed the hypocrisy of the allies, condemning German’s militarism while demonstrating even more militarism. 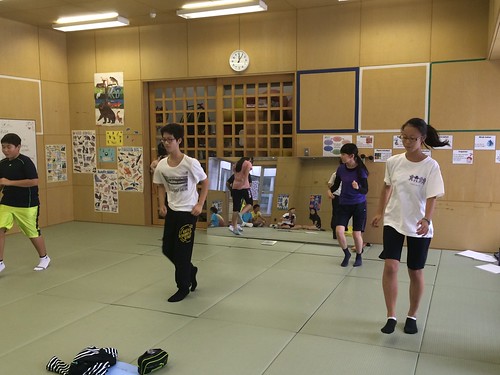 In other classes, Mr. Elshout was demanding perfection from the trumpet section and a short piece from the musical Chicago.  Next door, the high school choir was practice Carol of the Bells, a popular Christmas carol, based on Ukrainian folk music. The boys were supplying a low vocal harmony to the girls main melodic piece. A group of MYP students in physical education was practicing a choreographed dance routine. For the dance unit, the students have to demonstrate certain individual elements in artistic unity with their group members. The teenagers love it and dance is a lifelong skill that makes people feel good while they are doing it. Mr. Routh recorded the performance on his iPad and the students critically watched it, adjusting their routine in anticipation of the final performance next class. Another physical education class was doing the 12-minute run test. Two of the grade 10 students I asked, completed over 14 laps of the soccer field, which comes to about 2,700 meters. 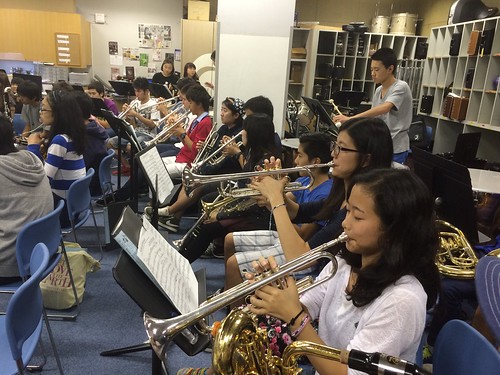 I ended my tour in the kindergarten A classroom. Mrs. Dawn Inada, does a spin on the traditional “show and tell” activity and asks the students to bring in an object in a bag and then she gives clues to the students for them to guess what is in the bag. The student with the bag gets to pick students and it is much more interactive than show and tell. The object inside the bag was a pine cone and we were all wondering how you say it in Japanese.

It is always inspiring to spend time with the students and makes all the hard work we do in the offices worth it.