During my time off from my doctoral studies, I am taking my first MOOC (Massive Open Online Course) through Coursera. The University of Edinburg (Scotland) is offering “Learning for Sustainability: Developing a Personal Ethic”. My purpose of taking the course is to allow me to reflect on my doctoral topic of sustainability in education and leadership. The course is being offered by the Outdoor Education department of the university.

My impressions of on line learning:

Week 1 – Disruption: Reorienting Our Thoughts The highlight of the first week was the lecture on the geological timeline by Dr. Peter Higgins, an Edinburg U professor of Environmental & Outdoor Education. The video took place at Arthur’s Seat, an extinct volcano outside of the city of Edinburg. Scotland is one of the top oil producing countries so the place has lots of relevance with sustainability. I didn’t know that Scottish scientist James Hutton was one of the first people to propose an old earth. In 1788 his “Theory of the Earth” ended with the famous words, “no vestige of a beginning…no traces of an end.”

Dr. Higgins gave an effective demonstration of the age of the earth. He walked the length of a 45 meter rope, each centimeter representing 1,000,000 years. It was enlightening to see that the fossil fuels created 360 to 300 million years ago, are being used up during the industrial revolution. This last 250 years are represented by the thickness of a human hair. Most of the oil, coal and gas reserves have been depleted during this time. Scotland is also famous for starting the first environmental society by Sir Patrick Geddes in 1884, while he was a professor at Edinburg U. He wrote the line, “By Leaves We Live” to emphasize our complete dependence on plants and he also was the first use the concept of think globally, act locally.

Assignment 1 “What Did You Have for Breakfast?

“Our first assignment was to look at what we had for breakfast and ask where did it come from and is it sustainable.I am on holiday in the eastern Bolivian city of Santa Cruz. It is one of the fastest growing cities in the world with a population of over 2 million people. It is located in the lowlands and is quite different from the Andean cities of Bolivia. It has a strong agriculture production due to its tropical climate and rich soils.

This morning I had a cup of Bolivian coffee. There is a small coffee production industry in the country. Bolivia has a great climate and altitude for growing coffee, but it is not very developed. The region is called Las Yungas, located in the foothills of the Andes just north of the capital La Paz. Immigrants from the barren altiplano were given small plots by the government and some of the land is devoted to coffee. I am happy to support the local industry and reduce the regular transportation costs I incur with my daily coffee habit. Coffee is grown in the tropics and when one lives outside of the tropics, it must be transported. There is not much information about the farming practices, but the Travel Channel television series, Dangerous Grounds, filmed an episode in las Yungas.

I also had a fruit salad, with fruits purchased from one of the local markets. I am not sure where the fruits were grown however. Most markets and supermarkets do not put the origin of the produce or if they are organic and sustainable agriculture. That was one of my big learning points in this exercise. To find the origins and information about how our food is produced takes a lot of time and effort. It would be convenient and logical to have this information easily available, via the web or via the product itself.

I used water with the coffee, and again, I didn’t know where the city’s water supply comes from. In speaking with my father-in-law who is Bolivian and doing some research, I found that the source is groundwater, from wells approximately 400 meters deep. I am not sure if the water table is falling or being depleted.

Is my breakfast sustainable? I do not know and I would have to put some time and effort into finding out. Some would be simple – asking the fruit vendor where the fruits come from. Others would be more difficult in finding out if the coffee or fruit grower is practicing sustainable agriculture.

In summary, all food/water production should include information on how and where it was produced to make it practical for consumers to make sustainable choices.

The top resource this week was the video from the Center for a New American Dream, an organization that publicizes the negative effects of a hyper-consumer culture. I discovered these concepts several years ago after we purchased a 3,500 square foot home in the USA. I wish I would have had the center to support me in getting out of it. I found much of our time was devoted to the upkeep of our dream home and not to just enjoying each others’ company. A simpler lifestyle offer more happiness and flexibility and as a by product, it is better for the earth and promotes social justice. I read the book Happy Money which also formed much of my ideas on materialism. The web site for the center has a lot of great resources.

There was also an interview with environmental philosophy professor, Dr. Robbie Nicol from the university. He highlighted the work of Dr. Peter Reason. Dr. Nicol outlined an epistemology (philosophy of ways of knowing) that showed we can know by direct experience, hearing from others, researching more about an experience, but it all means nothing if we do not act upon it.  Without action, all is fluff. How does one go from a deep understanding of an issue, to caring about it, to actually doing something about it. The big idea is the move from caring to action.

The lead professor on the course, Dr. Beth Christie, discussed a local environmental issue, air pollution in Scotland. The city of Edinburg measures chemicals and particulate matter in the air around the city and has defined where there are areas of high pollution. The main cause of high pollution levels is traffic. Reducing car exhaust will reduce pollution. I was surprised at the big effect air pollution had on heart disease and premature deaths of people. The Friends of the Earth stated over 2000 people die in Scotland due to air pollution causing earlier heart disease. Scotland to me seems like a very clean country, and I imagine the amount of air pollution in the cities I have lived (Belgrade, Osaka).

My personal response to air pollution is to always live close to where we work, even if we could find a nicer home further away. The time saved was my priority, but as a side benefit, we don’t own a car and bike to/from school and when we do errands around the neighborhood. Osaka has a lot of traffic and would have more like LA, but it is a bike friendly city and the trains are excellent. I always judge a city on its “bike-ability”.

The course asks us to look into a local issue and write about it. I am currently on holiday in Santa Cruz, Bolivia and the immediate issue that comes to my mind is waste management. There is garbage all over the city and not much recycling. It is one of the first things one notices when arriving here. Below is a photo of our street in Santa Cruz, just down the block from our house. This is typical and instead of being taken to a landfill, it is spread throughout the city. I really need to find out more about the issue. 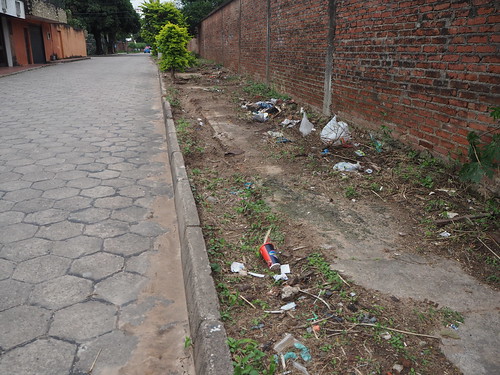 This week featured a video about the simple act of washing one’s clothes. The amount of energy that is expended on washing clothes today is much more than in the past. People have more clothes, wash them more often, etc. The four areas that determine how much we do this are social norms, technology, materials and social change.

Week 4 How Do We Take Action

Week 5 How Can We Inform and Educate Others?

They interviewed Scottish teacher, Rosa Murray who talked about her work on the head council for writing teaching standards in Scotland. Due to a 2-week outdoor education course, she came back inspired to put the learning for sustainability ideas into every one of the teacher standards. She formed an advisory council of experts, which included Edinburgh professors, local council members and NGOs like WWF to advise all the groups writing the standards. Rosa also discussed her work with the One Planet Schools and the Scottish council of teachers. She emphasized their issue with language and why they went with Learning for Sustainability over global citizenship. She argued that global citizenship is human-centered and LfS takes a broader perspective, taking in the environment and climate. This is quite ground-breaking and envied throughout the world. The job now is keep this alive in the practice of schools. I liked the video from the Story of Stuff Project called Story of Solutions. In summary, society needs to change the GOAL

I liked the idea of collaborative consumption (sharing) which can be done on a larger level with web sites like AirB&B/uber and bike share programs. Why does every house needs power tool, bike pump, etc when we can share? Claims too much brain power going towards increasing iPhone battery life instead of increasing human life. I really want to learn more about their project, which became famous in 2007 with the online video “The Story of Stuff” by Annie Leonard about our consumerist society.

There were also a couple of videos by the Natural Change Project which takes professionals out to a beautiful place like a national park. They are sent out in the morning with journal and a flask of tea and asked to stay outside alone for the entire day. It seems to be a life-changing event for the participants. This is a great idea. Most of the participants enjoyed the luxury of time to reflect and then share ideas with others.

The final video I thought was compelling was by Oberlin College / Vermont University professor and important environmentalist, Dr. David Orr. He said in the lecture below, that we do not teach place-specific environmentalism, how does one live well in the place we live? He defines ecoliteracy by reading nature and understanding how nature works. For example, agricultural is the largest destructive force on the environment and trying to feed 10 billion sustainability is not happening right now. Understanding the larger system and the effects of one practice or product on the whole system. He considers today the age of ecological enlightenment, which will be larger than than the first enlightement because it is global and spreads through the internet. We are in a race against time. He is also on the board of one of my favorite environmentalist writers, the Aldo Leopold Foundation.  The next time I am in Wisconsin, I must have a visit.