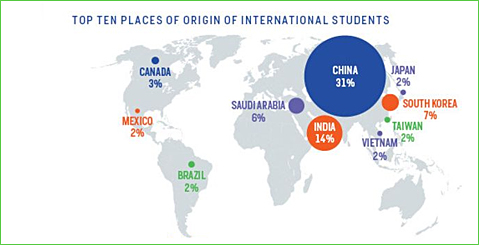 I read with interest the latest statistics from the Open Doors report. The report is funded by the US Department of State and is done by the non-profit organization, the Institute of International Education. The report shows enrollment statistics of international students studying the USA and American students studying abroad. Approximately half of OIS graduates matriculate in the USA.

More international students are going to the USA to study. This year had the highest growth in 35 years, with almost 1 million students enrolled in American universities. The USA hosts more internationally mobile students than any other country, more than double the second most host country, the United Kingdom. Just under 1/3 of the students are Chinese and they are fueling (along with India) most of the growth. This reflects China’s growing economy. About 300,000 Americans go abroad for study, with the UK being the most popular destination.

Approximately 20,000 Japanese citizens study in the USA. Japan from 1994 – 1998 lead the world in sending students, peaking in 1997 with 47,000 students. I am not sure why less Japanese are going to the USA. Reasons stated in the report are the effects of a rapidly aging population, the global economy and recruiting practices of Japanese companies. Japan ranks #8 in number of students studying in the USA.

SOIS students certainly have more options than I had growing up in rural Michigan. That is true with most international schools. I also see a growing trend of American universities having international campuses. For example, Temple University (Philadelphia, PA) has a Tokyo campus and two OIS students are matriculating at New York University’s Abu Dhabi campus. University education will continue to more international. 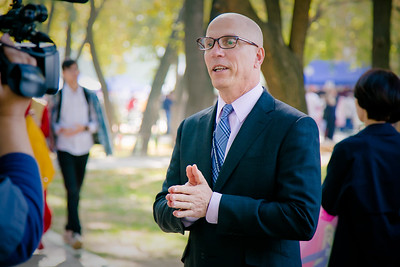