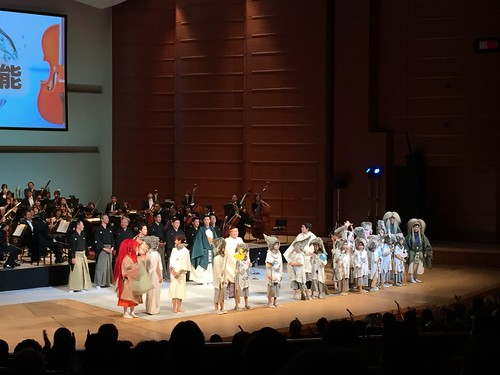 On Monday evening, Osaka International School elementary and middle school students performed with the Yamamoto Noh Theatre troupe and the Kansai Philharmonic Orchestra in the NHK Hall in Osaka. The performance was part of the East Meets West series which is testing out international groups for a festival in 2020 on the grounds of the Osaka Castle in conjunction with the Tokyo Summer Olympics.

The theme of the concert was “East Meets West”. The idea was for the noh play to be backed by a full symphony orchestra. It was combining major art forms from the 1300s (noh – Japan) with the 1700/1800s (classical music – Europe). The mix was absorbing: the sparse sounds of the drums and flute of noh with the sumptuous full orchestra. The play is about conservation of the rivers and bay of Osaka, was backed by pieces dealing with water, culminating in Strauss’s Blue Danube. 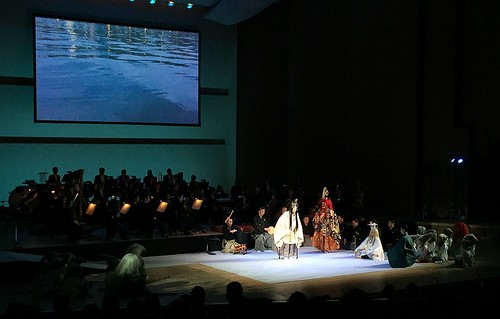 The audience of 1,400 ate up the children’s role in the play, as they brought a light touch to seriousness of noh and the sophistication of the orchestra. It was an amazing evening for our students. The opportunity to perform in such a stunning setting with professional actors and musicians is an experience the children will never forget. A special thanks to the parents who helped prepare the children and Yamamoto noh theatre troupe and the Kansai Philharmonic Orchestra.

Yamamoto Noh Theatre is working to make noh more accessible to a modern audience. After the performance I spoke with Petko Slavov, a Bulgarian PhD in ancient Japanese theatre, and his company, Okina makes digital content, like apps and games that teach ancient Japanese culture. They also help Yamamoto make school visits and noh workshops. We hope to have them come visit in the spring.